LTE and NR dynamically share spectrum at the millisecond level. Each spectrum resource element can be used by only one RAT at a time.

Downlink Data: LTE/NR carriers are active in the same band based on TDM dynamic sharing.

What are the implications for NR Devices?

Architecture for interworking between 5GS and EPC/E-UTRAN 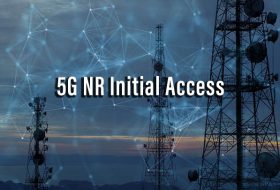